Sit back read and enjoy.

The Dos and Don’ts to Dialogue Tags by Ryan Lanz

Writers use dialogue tags constantly. In fact, we use them so often that readers all but gloss over them. They should be invisible. However, there are ways to misuse them and make them stand out.

In an effort to avoid that, let’s take a closer look at dialogue tags. Toward the end of “Tag travesties” is something I sorely wish someone had told me before I started writing.

Why do we use dialogue tags?

The simple answer is that we use them to indicate who’s speaking. In visual media, such as movies or television, the viewer can easily tell who’s talking by lip movement and camera angles. When reading a book, obviously that’s not an option.

There are certainly ways to misuse dialogue tags. When I was a new writer, I felt compelled to overwrite. I ‘m sure every new writer goes through a version of this. I observed how successful writers used simple tags like “said/asked” and thought to myself, that’s boring. I’m going to be an awesome writer by making them more interesting. You don’t have to admit it aloud, writers, but we all know that most of us have. Let’s look at an example of this:

For those of you who still aren’t convinced, let’s up the dosage with a paragraph:

Hank crossed the room and sat down. “We should have never waited this long for a table,” he seethed, leaning over to glare at her.
“If you wanted a better spot, you should have called ahead for a reservation,” Trudy returned pointedly.
“Well, perhaps if you didn’t take so long to get ready, I could have,” he countered dryly.

Can you imagine reading an entire book like that? *shiver*

So why do new writers feel the urge to be that . . . creative with their dialogue tags? Back in the beginning, I thought the typical tags of “said/asked” were too boring and dull. It didn’t take me long to realize that dull (in this context) is the point.

Image your words as a window pane of glass, and the story is behind it. Your words are merely the lens that your story is seen through. The thicker the words, the cloudier the glass gets. If you use huge words, purple prose, or crazy dialogue tags, then all you’re doing is fogging up the glass through which your reader is trying to view your story. The goal is to draw as little attention to your actual words as possible; therefore, you keep the glass as clear as possible, so that the reader focuses on the story. Using tags like “said/asked” are so clear, they’re virtually invisible.

Now, does that mean that you can’t use anything else? Of course not. Let’s look further.

Some authors say to never use anything other than “said/asked,” while others say to heck with the rules and use whatever you want. Some genres (such as romance) are more forgiving about using alternate dialogue tags. I take a more pragmatic approach to it. I sometimes use lines like:

“I’m glad we got out of there,” she breathed.

The very important question is how often. I compare adverbs and alternate dialogue tags to a strong spice. Some is nice, but too much will spoil the batch. Imagine a cake mix with a liter of vanilla flavoring, rather than the normal tablespoon. The more often you use anything other than “said/asked,” the stronger the flavor. If it’s too powerful, it’ll tug the reader away from the story and spotlights those words. In a full-length book of around 85,000 words, I personally use alternate dialogue tags only around a few dozen times total.

By saving them, the pleasant side effect is that when I do use them, they pack more of an emotional punch.

Related: How to Write Natural Dialogue

I have a love affair with action beats. Used effectively, they can be another great way to announce who’s talking, yet at the same time add some movement or blocking to a scene. For example:

Looking down, Katie ran a finger around the edge of the mug. “We need to talk.”

That added some nice flavor to the scene, and you know who spoke. The only caveat is to be careful of not using too many action beats, as it does slow down the pacing a tiny bit. If you’re writing a bantering sequence, for example, you wouldn’t want to use a lot of action beats so as to keep the pacing quick.

Sometimes, action beats and dialogue tags have misused punctuation. I’ll give some examples.

Like many things in a story/novel, it’s all about balance. Try alternating actions beats, dialogue tags, and even no tags at all when it’s clear who’s speaking. By changing it up, it’ll make it so that no one method is obvious. 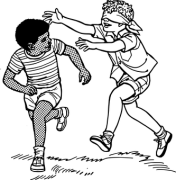 What do you think about dialogue tags?

Do you use a lot of them or stick with the basics?

Don’t forget to hop over to Ryan’s blog. You can reach him here…

Ryan Lanz is an avid blogger and author of The Idea Factory: 1,000 Story Ideas and Writing Prompts to Find Your Next Bestseller. You can also find him on Twitter, Facebook, and Tumblr.

I HOPE YOU’LL TAKE A MINUTE TO FOLLOW ME ON SOCIAL MEDIA, JUST CLICK ON THE BUTTONS BELOW. I’LL LEAVE A LIGHT ON.

18 thoughts on “The Dos and Don’ts to Dialogue Tags”